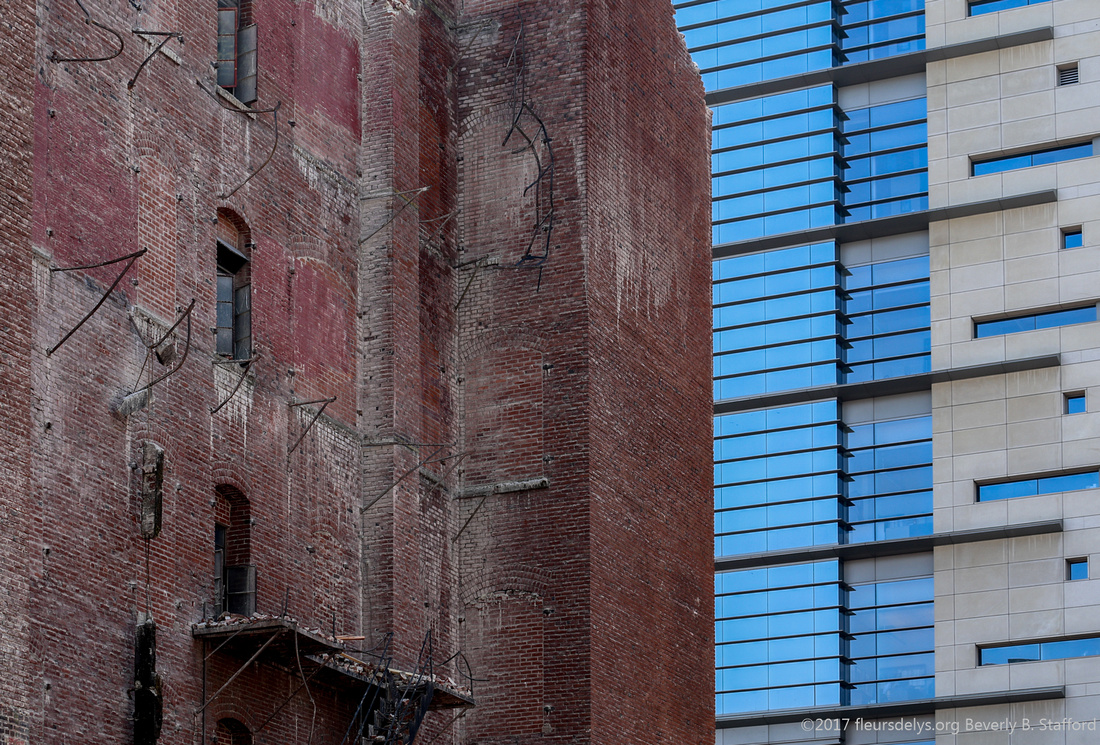 Ancient Order of United Workmen Temple in process of demolition 2017

This structure, shown in the Lost Spaces Gallery, was a fascinating sight in downtown Portland, a building in disrepair in direct contrast to the contemporary architecture around it.

Designed by Justus F. Krumbein, a prominent Portland architect in the late 19th century, it was completed in 1892. and at one point was the home of  the Oregon Historical Society. In recent years it remained empty without much change, until 2015, when the City of Portland removed the building from the city’s Historic Resource Inventory, having deemed it unsafe. (Source: Wikipedia entry for the Ancient Order of United Workmen Temple).

Demolition was planned to begin in August, 2017. On one of those days I happened to be driving by, and noticed that the destruction of the building had begun. I raced home to collect my camera and returned to the site to walk around the entire block, and to observe the action from above in an adjacent parking garage. This scene drew quite a crowd particularly of downtown workers at lunchtime, who similarly paused in their day to watch the machinery in action. With its removal, it was an historic month of change in this specific downtown neighborhood. In the general vicinity there remain some older buildings still in use of the approximate vintage as the United Workmen Temple.

Blue Heron Paper Mill, 2015
Similarly, the images of the Blue Heron Paper Mill in Oregon City show a place with a fascinating history, a silent ruin of a space. At one point, tours could be arranged to visit sections of the old mill, that I attended through a photography group I belong to. On the appointed day we were given hard hats to wear for the limited tour as we listened to a guide tell the story of this place. It was fascinating to hear the story of workers and production in a place that was now silent and empty, layered with the history of this site when it was the Charcowah village of the Clowewalla (Willamette band of Tumwaters) and the Kosh-huk-shix village of Clackamas people. In August, 2019, the Confederated Tribes of Grand Ronde finalized their purchase of this site at Willamette Falls, restoring ownership of their original homeland.

Local Architectural History:
Portland organizations such as the Architectural Heritage Center offer opportunities to learn about the architectural history of Portland through walking tours, lectures, and exhibitions, providing fascinating insights about local places that can be significantly different from what we see at the present time.